● To release oxygen is also a task.

Hemoglobin is well known as a molecule that binds to oxygen O2. However, carrying and delivering oxygen to the necessary places is a job, so hemoglobin must also have the ability to obviously release oxygen. The biggest factor determining whether hemoglobin captures or releases oxygen is, of course, the concentration of oxygen around hemoglobin. When the surrounding oxygen concentration is high, hemoglobin binds oxygen and releases it when the oxygen concentration is low. This seems to be a natural story. However, hemoglobin has a clever cliff that has advanced one step. It is a graph called oxygen dissociation curve that well represents it.
—

● Depending on the concentration of oxygen around it, sticking and getting away

Dissociation means that the objects that were bonded are separated. The dissociation curve shows how the oxygen O2 bound to hemoglobin leaves as a change in quantity. Normally, the oxygen dissociation curve shows the proportion (percent) of hemoglobin (oxygenated hemoglobin, oxyhemoglobin) that binds oxygen among the total amount of hemoglobin in the environment on the vertical axis of the graph, in other words the “binding rate” , or “oxygen saturation” is taken, while on the horizontal axis the concentration of oxygen in the environment is taken. However, the horizontal axis of the actual graph is not used much for the numerical value of oxygen concentration (mg/L, etc.). It is common to express in units of mmHg the unit of oxygen partial pressure (which seems to use the word oxygen tension in English) which is easy to control directly in experiments. It seems that the partial pressure expressed in units of mmHg is now old, but it is still in use for a while in Japan. (In the new display use unit Torr. The numerical value does not change.)

When the amount of the maternal to be bound, such as hemoglobin, is constant, it is limited to a certain range that the binding rate sensitively changes according to the change in the concentration of the substance bound to the matrix. When the concentration exceeds this range the change in the coupling ratio becomes dull. This is not particularly limited to hemoglobin, it is a simple property commonly manifested in biochemical reactions. Speaking of a simple story, if all the hemoglobin binds oxygen molecules, it is 100%, there is no reason to increase the binding amount beyond that. Successfully, it would be a gas exchange method that used the range of hemoglobin reaction well.

● Hemoglobin gets full with alveoli

The oxygen satiated hemoglobin returns to the heart once again and is sent out through the artery from there to the whole body. As the artery progresses more and more branches and becomes thinner, the concentration of oxygen and carbon dioxide in the blood remains almost unchanged until it comes to the terminal capillary. The oxygen partial pressure of the arterial blood is almost 100 mmHg (exactly 98 mmHg or more?). Even though the gas diffuses through the cell membrane, it is obstructed by the tightly surrounding muscular layer and the connective tissue layer, so that in the artery the gas does not easily escape outside.
But as soon as blood reaches the capillary, things change completely. The muscular layer disappears, it becomes only a single layer of endothelial cells, and the surrounding wall becomes easy to pass.For tissues around the capillary, the oxygen partial pressure is lower than 40 mmHg. Oxygen is always lacking due to cellular activity. Oxygen molecules leave the wall of the blood vessel at a stretch from hemoglobin in the capillary due to this oxygen partial pressure drop.

●As carbon dioxide increases, it becomes easier to release oxygen

● Shifts to the right even when it gets hot

Even when the temperature rises, hemoglobin becomes easy to release oxygen. Not only when exercising but also generally, as cellular activity rises energy release will increase somewhat and the temperature will rise, so this is also a reasonable property.

In the experiment, a breath holding experiment was carried out using an oxygen saturation meter at hand, a pulse oximeter (Nippon Kohki oxyparmini SAT-2200). Then, the oxygen saturation with the left index finger originally 99% began to fall from about 1 minute past breath-hold and reached 91% in 2 minutes.
Breathing was restored soon, but despite the saturation level, it continued to fall further and dropped to 85% over about 20 seconds. After that, it quickly recovered to more than 95%. The time lag may be due to the arrival time of the blood flow from the lung to the fingertip. Therefore, at the end of the breath holder, it seems that the oxygen binding rate decreased to 85% or less due to a decrease in the oxygen partial pressure of the alveolus and an increase in the carbon dioxide partial pressure. Ignoring the influence of carbon dioxide, it is estimated that the oxygen partial pressure decreased to around 60 mmHg when the bonding ratio is 85%. While the oxygen partial pressure in the alveolus seems to decline in proportion to the time almost immediately after stopping breathing, it takes much longer than 20 seconds for the oxygen saturation to begin to decline, and as soon as respiration is restored The change that comes back to the original is the way the hemoglobin dissociation curve shows itself. 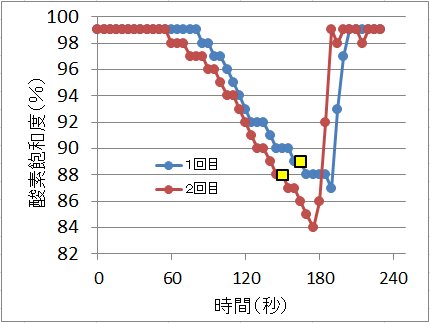 The breath stopped until the point of yellow marker and then resumed immediately thereafter.

This site uses Akismet to reduce spam. Learn how your comment data is processed.